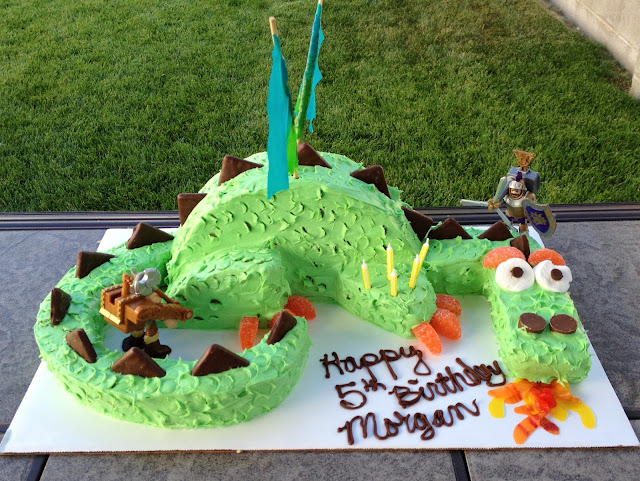 For his 5th Birthday my little Man was very specific about his cake “I want a fire breathing dragon cake!!”  Imagine my panic when I realized Paula was going to be out of town!!!!!!
I hit up the internet and THANK HEAVENS someone smarter than me had someone who wanted a Fire Breathing Dragon cake too because I could never have come up with this on my own.
Before I give you the link to the tutorial I wanted to let you know I DID make a few changes.  Very little ones but I think they made a bit of a difference.
1.  Instead of cutting the marshmallow directly in half I cut it in half at a diagonal, it made the eyes sit up so they could be seen from the front of the cake instead of being flat looking straight up.  I also couldn’t get my chocolate chips to push into the marshmallows and stay so I cut the tips off and used a little white frosting to attach it to the marshmallow.
2.  The tutorial calls for 2 hershey’s kisses for the snout.  IF you have those on hand awesome but if like me you don’t those 2 hershey’s kisses can cost you like $4.00 for a bag of them when you only need 2!!  Instead of buying a whole bag of kisses I bought a roll of Rolos for $.69 and used 2 of them! They worked just as well as you can see.
3.  I did not buy the sunkist fruit gems.  I just bought the orange slice gummies that you can get a bag for like $1.00.
4.  No one I knew had a 9″ round cake pan so I used a 10″ round cake pan which is why mine takes up so much more room on the cardboard.  It worked very well in the bigger size and I would guess the 8″ round cake would work too just smaller.
5.  I bought 3 tubs of white frosting and colored it green.  I had PLENTY left over but I used chocolate between the 2 body pieces and did a crumb coat on the whole cake with the plain white, I think it helped the green go on easier.
6.  Cutting the chocolate graham crackers wasn’t hard but have PLENTY on hand to cut because a lot of my triangles crumbled on one corner or the back, I had to pick the best of the best.
7.  I couldn’t find any solid colored fruit roll ups.  They do have orange fire ones right now so I used those for the fire and had to make do with a blue/green one for the wings.  The wings were a little flimsy for me but I still think the look was accomplished.  I just free handed the pieces for the fire and then made them so they weren’t flat by bending them and stuff.
8.  In case you’re wondering.  The 5 year old wanted to have guys fighting his dragon.  The 2 toys are Imaginext guys – a Knight and a Viking – the two he decided would likely fight a dragon.
9.  The marker lid works awesome but only use kind of the side of it, don’t just put it up and down or it’ll just do circles, I liked that in some places it went all the way to the cake, made it look more like scales.
10.  It went together SO much easier than I anticipated and was a hit.  I totally recommend it! 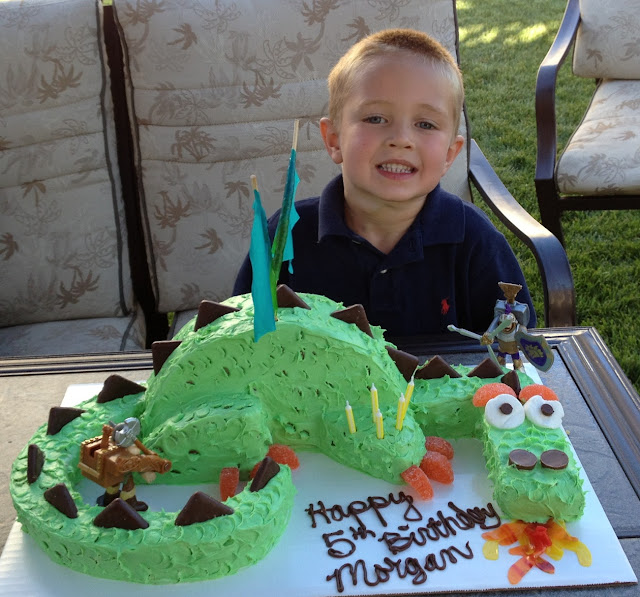 Here is the Tutorial!! 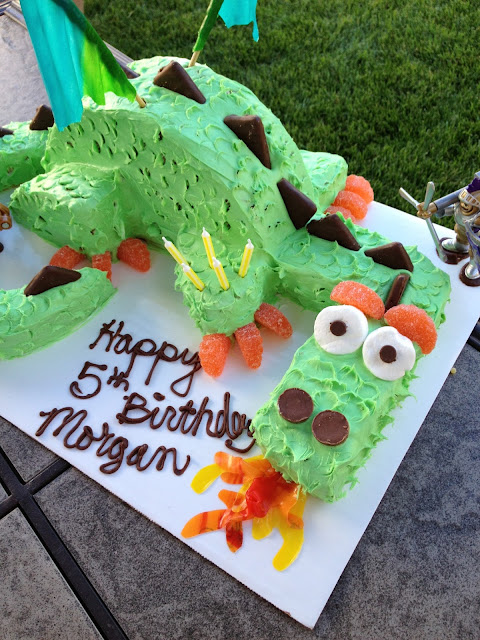 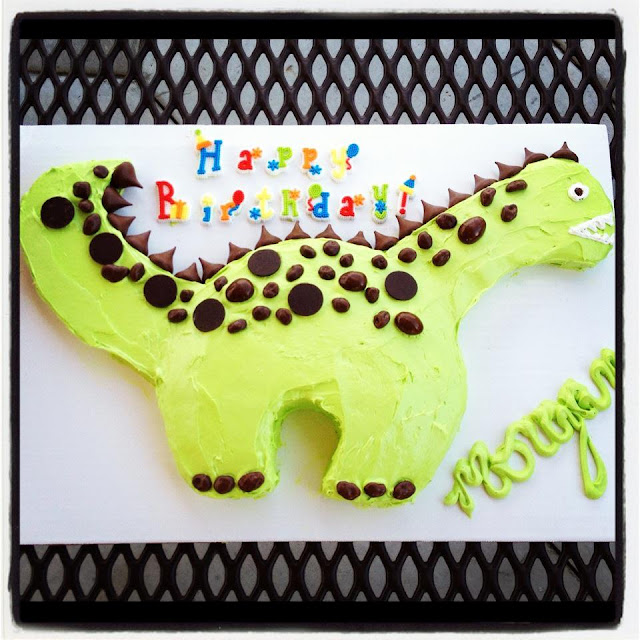 © The REAL Housewives of Riverton, 2011-2012. Unauthorized use and/or duplication of this material without express and written permission from this blog’s authors and/or owners is strictly prohibited. Excerpts and links may be used, provided that full and clear credit is given to The REAL Housewives of Riverton with appropriate and specific direction to the original content.
Previous Post: « Father’s Day Gifts, Cards, and FREE Printables
Next Post: KitchenAid Mixer Summer Giveaway!! »