Home » chicken » Our Chicken Coop – A story of chickens

BEFORE COMMENTING PLEASE READ!!!!!
UPDATE:
Hello dear readers!!!  We are so glad you love our chicken coop so much.  We did not originally intend to share plans/dimensions/directions when we made this post which is why they’re not included here.  We love that you love our coop and love that it has been shared multiple times, sadly it has been shared by sites saying we had all the directions for building the coop which we do not.  Please consider this an inspiration post, something to look at to give you an idea of what you can create yourself.

So WAY back in March…Josh and I had a talk with the boys and we decided as a family that we would get some chickens.  We were all pretty excited about this new adventure and couldn’t wait to get started!  At the beginning of April we headed over to IFA to figure out what we would need and how many chickens we wanted.  They had a very helpful employee who told us everything we would need to know about taking care of our chickens.  Also, lucky for us we had a friend available to answer any questions we might have!

The boys were excited to help pick out the chickens and were even more excited when the IFA staff told us the chicks needed to be held lots and lots so they would be used to the kids. 🙂  After about an hour there we came home with… 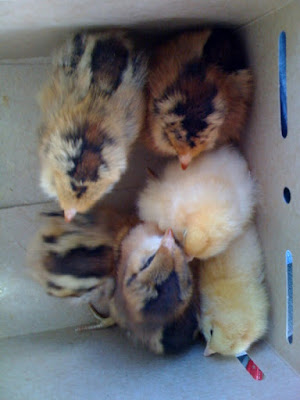 Six adorable chicks!  Because we are a family of five we decided to get two chickens that are said to lay daily and four chickens that lay 3-4 times a week.  We figured that would be plenty of eggs for us!
A couple weeks later, IFA did an Easter Egg Hunt.  Now being a farm supply store, they don’t give away just candy in their eggs, they also give away…you guessed it CHICKENS!  (And bunnies and ducks and turkeys) Jenn’s kids ended up with four leghorn chicks!  Another family in our ward decided they didn’t need any extra chickens and gave Jenn’s family another two chicks!  Since we were already building a coop for our chicks, we offered to let Jenn’s family’s chicks live with ours. 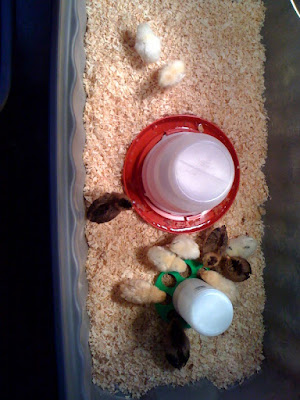 So here are the little chicks!  Happy under their heat lamp and eating away! 🙂
While our chicks were perfectly happy in the garage, in their tote…it quickly got too small for 12 chicks.  As soon as they were ready, we transferred them to the backyard to a makeshift coop.  I did not take a picture of the makeshift coop because…well it was pretty sad.  It served it’s purpose and the chickens loved it but it was not anything you’d want to show off!  With that in mind, Josh began the process of building a coop for our chickens.  We saw a coop at IFA that we thought looked great!  However, it was $600.00.  As much as we liked our chickens…we didn’t $600.00 like them!
So Josh took a few measurements and we sketched out what we wanted for our chickens, using the IFA coop as inspiration.  We took a trip to Lowe’s to price out our materials.  We were lucky enough that we had left over wood, Jenn’s family had left over wood and a family a few  houses down from us reroofed their house and donated their left over roofing supplies to us!  It was our goal to use as many materials as we already had and keep the cost as low as possible!
Let me say now…Josh and I have never “built” anything.  Really.  This was quite an adventure for us (mostly Josh since he did almost all of the work) and I’m so happy with how it all turned out! 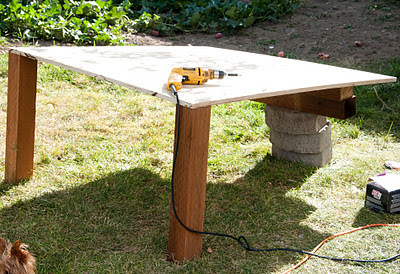 He started with the base for the coop itself.  We wanted to make sure that there was enough clearance for the chickens to use under the coop as part of the chicken run. 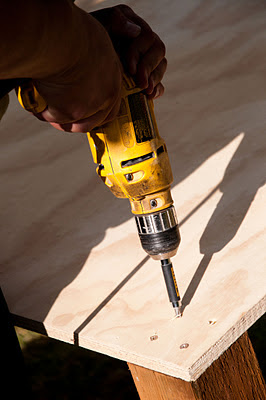 He used four 3″ screws in each post to make sure it was nice and sturdy. 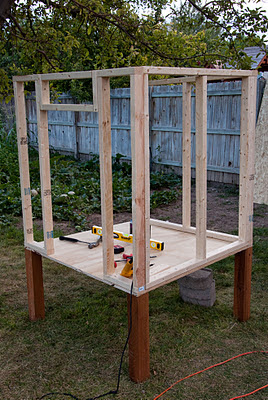 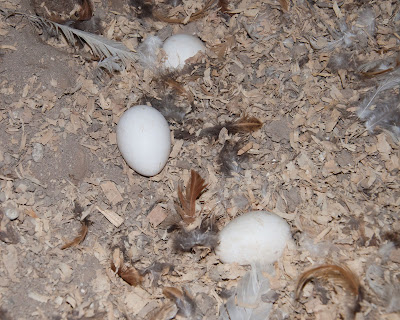 Look what happens when you start building a chicken coop…your chickens start laying eggs! 🙂  (So far Jenn’s chickens are the only ones laying.  Lucky for us, our chickens are DUAL chickens so if they don’t get to laying…they’re going to get to frying!) 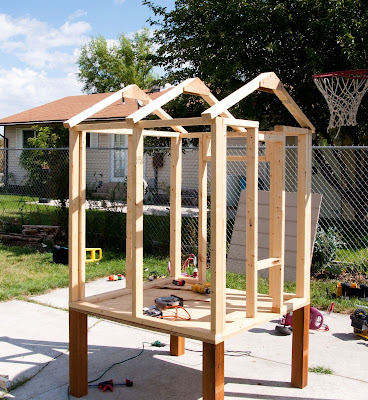 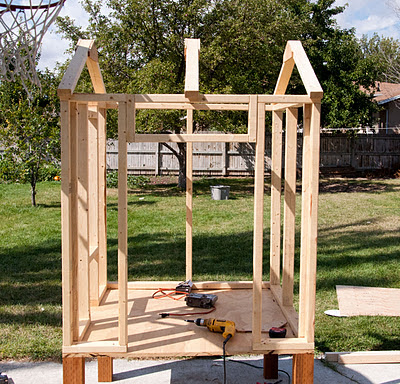 The framing completed from two angles. 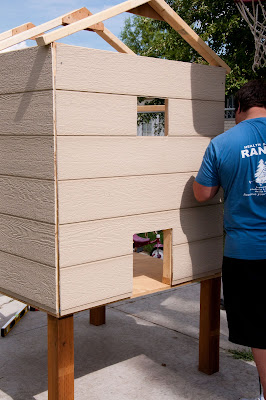 Up go the walls! 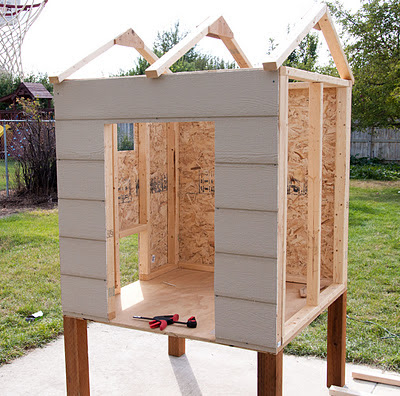 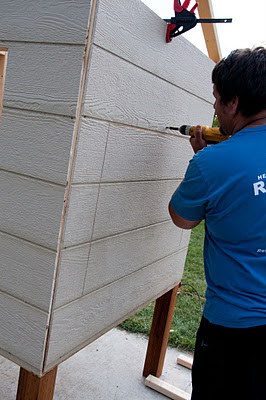 Putting in the hinged door for collecting eggs. 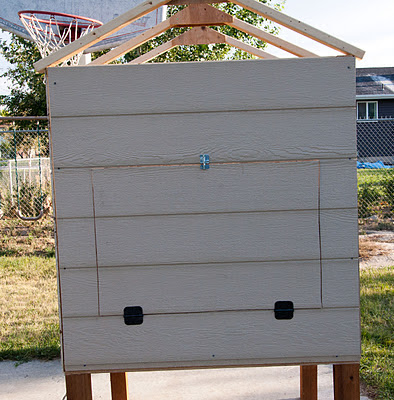 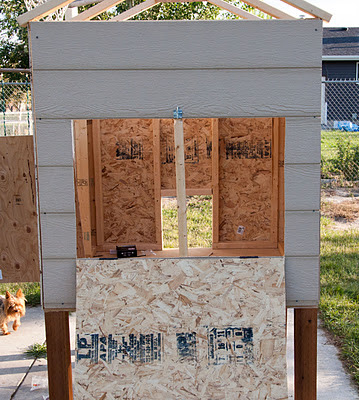 Getting the eggs out will be a breeze! 🙂 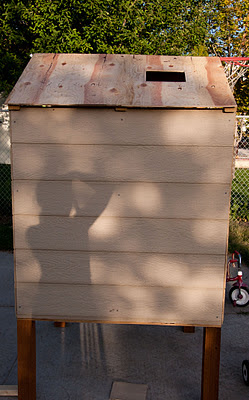 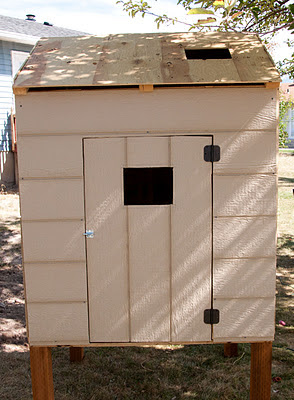 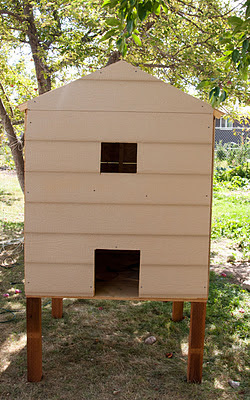 A few angles of the walls all up and the plywood for the roof up.  As you can see, our coop has skylights…that’s how we roll. 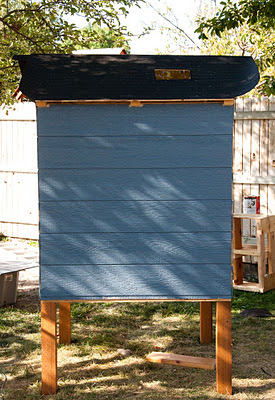 First coat of paint and the tar paper on the roof.  You may wonder why we chose this color for the chicken coop.  Well to be completely honest, we picked colors we wanted to paint our house and figured the coop would be the perfect guinea pig to see if we like the colors! 🙂  The coop is Valspar’s Royal Gray.  (I know, it looks blue to me too!) 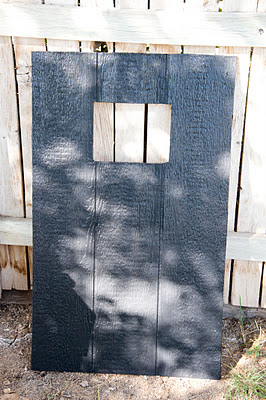 For the door we chose Valspar’s Kettle Black.  It has blue undertones so it goes really well with the Royal Gray. 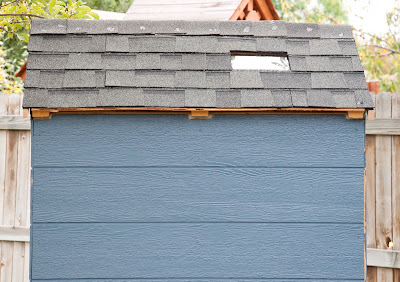 The roof complete with the windows in.  I’ve seen lots of super cute chicken coops with real glass windows.  It was less expensive ($1.29 a pane) to just use plexiglass.  And it worked perfectly! 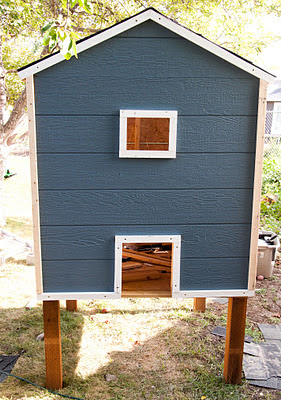 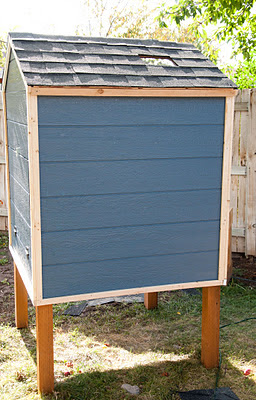 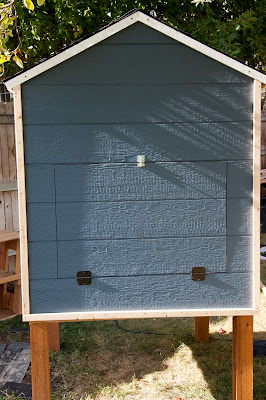 The chicken coop with the final coat of paint, windows/hardware on and trim put up. 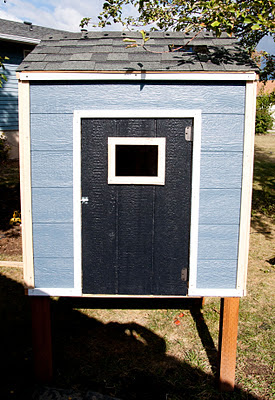 The door on the chicken coop.  We chose to put a large door on the side to make it easier to clean out for us.  And I have to say that it makes it look way cuter! 🙂 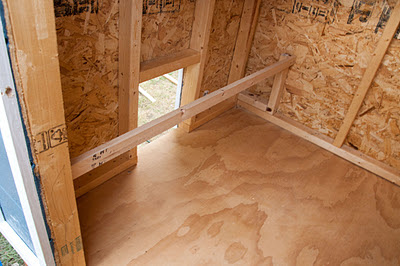 The Roosting bar inside the chicken coop. 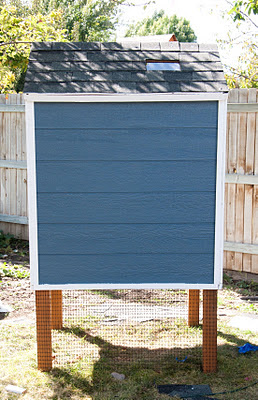 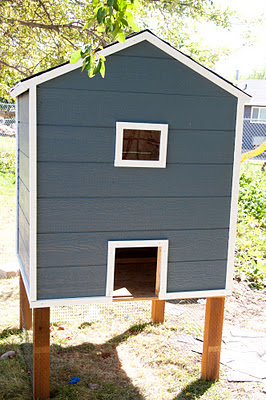 Trim all painted and mesh put around the bottom of the coop. 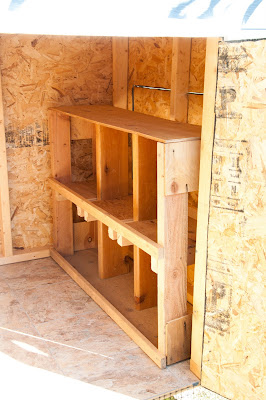 The nesting boxes.  The only thing I didn’t get a picture of was the peel and stick tiles that we put on the bottom of the coop.  They were only $0.02 a tile!  I think we ended up using about 14 tiles. 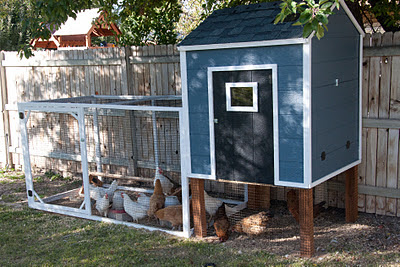 The finished chicken coop with the happy chickens inside! 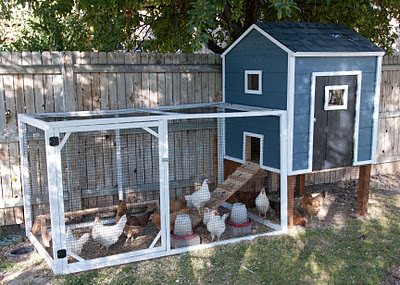 Another angle.  After the chicken coop itself was completed.  Josh used 2 x 2’s and 2 x 3’s to build the frame for the yard and another, outdoor roosting bar.  We also added in the ramp for the chickens to get into the coop.  I’m super proud of Josh for all of his hard work and I’m really excited for how amazing it turned out!!  Our total cost for the entire coop…every last nail, hinge, can of paint, everything was about $290.00.  And the best part is the chicken coop and run are significantly bigger than the one at IFA. 🙂  So HUGE round of applause for Josh and the chicken coop!

© The REAL Housewives of Riverton, 2011-2016. Unauthorized use and/or duplication of this material without express and written permission from this blog’s authors and/or owners is strictly prohibited. Excerpts and links may be used, provided that full and clear credit is given to The REAL Housewives of Riverton with appropriate and specific direction to the original content.